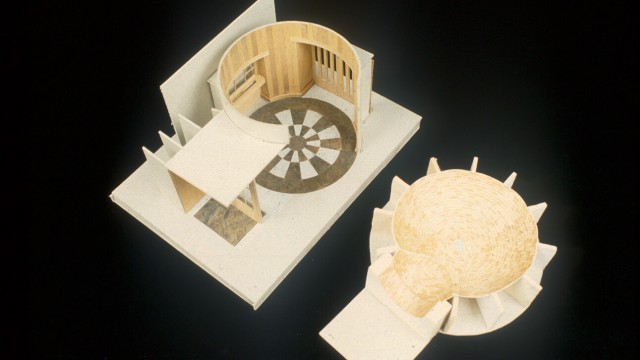 Giuseppe De Finetti ( 1892-1952 ,Milan) was an Italian architect and urban planner. It was one of the most interesting architects of Milanese architecture of the first half of the twentieth century, the art movement ” 20th century.”

He began his studies in Milan, but since attracted ago by young European architectural culture, he completed his training in 1912 in Berlin and then to Vienna , where, in the years preceding the war, he became a pupil of A. Loos, by deriving enduring characters in its design as rigor, antidecorativismus and attention to the proper use of materials. After the war he graduated in Bologna and began his professional career in Milan, working occasionally with other members of the cultural area that is usually identified as the ” 20th century “even if they do not adhere to the concept of the” return to order “. Despite its critical position, his works have made a search for formal simplification of the classic elements that is in fact, the common element of Milanese architecture between the ’20s and ’30s.

In the mid-thirties, Vittorio Crespi – important textile industry and one of the founders of the Courier  della Sera –  de Finetti commissioned to build him a house hunting within the reserve Ronchi, an estate near Vigevano, not far from Ticino. A single bond, the use of materials of the Lombard tradition such as stone and brick. The creativity of de Finetti, free from all formal and economic compulsion, gave birth to a draft  rigor and simplicity characterized by innovative elements: a classical structure in which the central body and the two small side wings are covered with an unusual brick facade outside that unifies the three levels, a symmetrical layout that in an original way – thanks to the distribution of local service rooms in the left wing and vertical connections and access points off-center – expected to fruition asymmetric spaces. The ground floor is entirely dedicated to hunting and is characterized by strong and masculine elements. The circular atrium entrance hall gives access to the armory and the hunters, here elements of wood and brick vaults blend masterfully to create a warm and cozy, perfect for the return from trips hunting. The upper floor is the main floor, the rooms are spacious and bright, are designed to accommodate dinners for spend time with the guests around the fireplace in one of the side rooms Friulano or to dance in the large hall central double height. The top floor is simple and harvested; around the central balcony overlook the apartments of Mr. and Mrs. and the guest rooms, all characterized by a sober elegance and great attention to detail. And if you can see inside the fireplace under the window inspired by Wright, splendid paneling cedarwood and sought details of the handrails of the stairs, outside the simple charm open terraces the surrounding countryside and bucolic murals Gianfilippo Usellini. Today, Villa Crespi, created for relaxation of its owner and a small circle of friends, it is become a great location for events where you can still feel the care and taste of its creator.