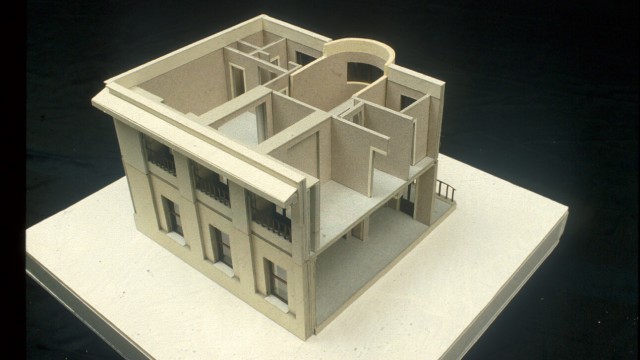 Giuseppe De Finetti ( 1892-1952 ,Milan) was an Italian architect and urban planner. It was one of the most interesting architects of Milanese architecture of the first half of the twentieth century, the art movement ” Twentieth century.”

He began his studies in Milan, but since attracted by young European architectural culture, he completed his training in 1912 in Berlin and then to Vienna. There, in the years preceding the war, he became a pupil of A. Loos, by deriving enduring characters in its design as rigor, antidecorativismus and attention to the proper use of materials. After the war he graduated in Bologna and began his professional career in Milan, working occasionally with other members of the cultural area that is usually identified as the ” Twentieth century”. Even if they do not adhere to the concept of the” return to order “. Despite its critical position, his works have made a search for formal simplification of the classic elements that is in fact, the common element of Milanese architecture between the ’20s and ’30s.

The entire building complex, called the “Garden of Arcadia”, of which De Finetti was an architect and contractor, were made only two buildings: the house of the Meridian (1924-1925) and the house in Via S. Calimero (1929-1930) , the only urban dwellings built by the De Finetti. The House of Meridiana included five apartments on six floors, with some environments (the concierge, laundry, local heating, cellars, elevators) in common. “The external form of the building reveals the internal volume, decreasing upward and merges rhythmically with the mass of a truncated pyramid that rises centenary cedar of Lebanon to the east of the house. At the top of the highest part of the south façade is drawn in a frame of just projecting a large sundal.

The house in Via San Calimero was built with the main front on the street and the back side of the inner courtyard of the house of the Meridian. The lift is designed to replace the central staircase, allowing the input directly into each apartment thus ensuring complete autonomy for each dwelling.