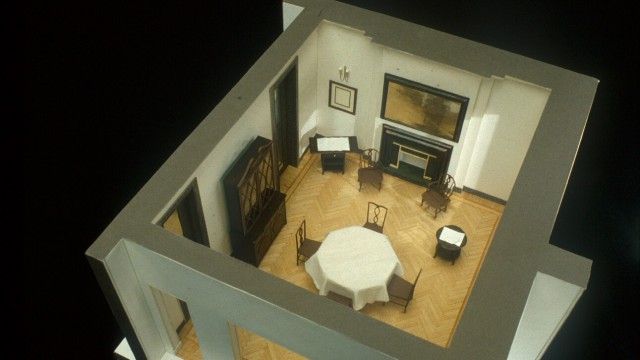 Giuseppe De Finetti ( 1892-1952 Milan) was an Italian architect and urban planner. It was one of the most interesting architects of Milanese architecture of the first half of the twentieth century, the art movement ” Twentieth century.”

He began his studies in Milan, but since attracte d ago by young European architectural culture, he completed his training in 1912 in Berlin and then to Vienna , where, in the years preceding the war, he became a pupil of A. Loos, by deriving enduring characters in its design as rigor, antidecorativismus and attention to the proper use of materials. After the war he graduated in Bologna and began his professional career in Milan, working occasionally with other members of the cultural area that is usually identified as the ” Twentieth century “even if they do not adhere to the concept of the” return to order “. Despite its critical position, his works have made a search for formal simplification of the classic elements that is in fact, the common element of Milanese architecture between the ’20s and ’30s.

An elegant building built in the 20s that has a curious and original aspect for a city like Milan: the presence of a sundial on the facade. Created in 1925 by the painter and architect Giorgiotti Zanini, has decorations in the shape of musical instruments over the dial. E ‘equipped with a gnomon, a thin sheet of metal shaped like a triangle, whose longest side directed towards the North Star, the picture shows the hours and the local true solar day lines. It forms in the presence of the sun, the shadows that are used to read the time of day.

We are in Marchiondi street, on the left side Gaetano Pini Hospital. The building is nestled between the highest and some apartments that do not compromise the massive urban characteristics of value in the area. The house, “signed” by Giuseppe De Finetti, a pupil of the Viennese architect Adolf Loos, is located near the historic center of the city, just a step from the circle of canals and the church of San Calimero, easily accessible by public transport, get off at stop spreader metro yellow line.

The building is conceived as a conglomerate of five apartments side by side, overlapping, realized on the basis of requests from many clients. There is no longer the main staircase, but was introduced a stand-alone elevator that leads directly to individual apartments. Of considerable interest and extraordinary wealth are the interiors.