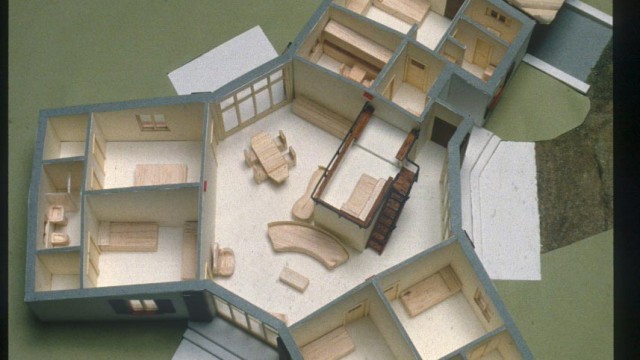 Franco Albini and Franca Helg were Italian neo-rationalist architects and designers. After Franca Helg graduated from the Politecnico di Milano  in 1945 (Franco Albini in 1929), they were active both in the field of architectural planning and in industrial design, with important project interventions.  They were was for long associated professionally.

This example presents one of the Albini’s most significant post-war work and its respective relationships with Italian architectural culture. In particular, taking into consideration a historical period ranging from the urgency of reconstruction through to the early Sixties, attention is focused on three themes: a reflection on educated and spontaneous tradition, Neorealism and organic influences; Albini’s specific point of view.

This compositive studio of the villa Olivetti di Ivrea was built on a hexagonal ground plan, but here it has been simplified in a “Y” plot to have new articulations from the outside and the inside.