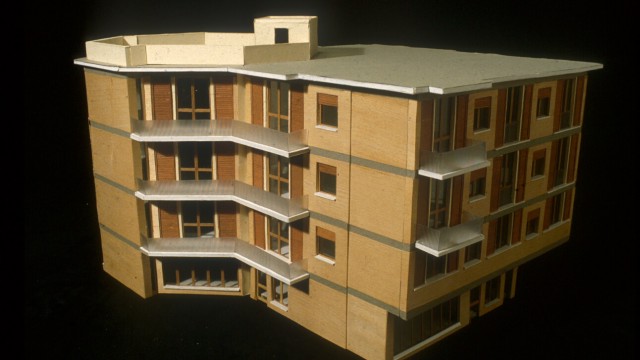 This project was one of Carlo De Carli’s first architect works, located in Milan. It has six floors (though in the image, the model only shows four stories) and is mainly for apartments and offices. The irregularly shaped outline of the whole building is because of the gently curving street, on which it is located.

There is a series of continuous loggias wraps around the entire building, which stack one on another. The whole reinforced concrete loadbearing structure was initially settled by an orthogonal framework envelope, to hold the loggias in the air. The pillars, interrupt the horizontal bands of doors and windows. At the same time, the aluminum uprights support the glass and the handles of balconies. Thus the double diaphragm on the surface, separating the interior and outside can reflect the blue sky.

The top two floors were planned as “hanging villa”. They are gradually set back to screen off from the loggia. Thus the portions of sky were conceived in the form of architecture, which is one of the recurring theoretical principles of De Carli’s architecture design.