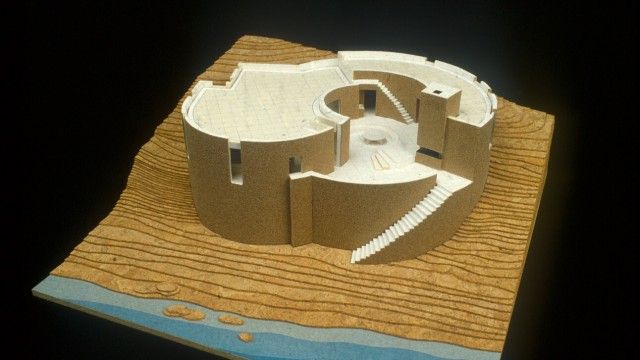 Born in Milan in 1924, Cini Boeri graduated from the Politecnico in Milan in 1951. She worked for the Zanuso practice from 1952 to 1963 and since then she has worked as an independent professional in the fields of architecture and industrial design.

This house is perfectly adapted to the steep slope of the land, built in an equilibrium point. It is designed by several circles with a central one which is the patio. This one is also de main space in the house and is almost completely surrounded by the interior architecture, in which we can differentiate two regions: the first one is composed of the familiar rooms and their common areas (bathrooms, kitchen or living room), and the second one is destined to the guests. The patio makes the difference between these two independent regions, and it is reached by a white staircase that follows the exterior shape of the house.

The lower volume, which contains the water tank, is partially inserted in the rocks. All the architecture is joined together with the ground, and consequently the plaster of the exterior walls is painted in the same color.