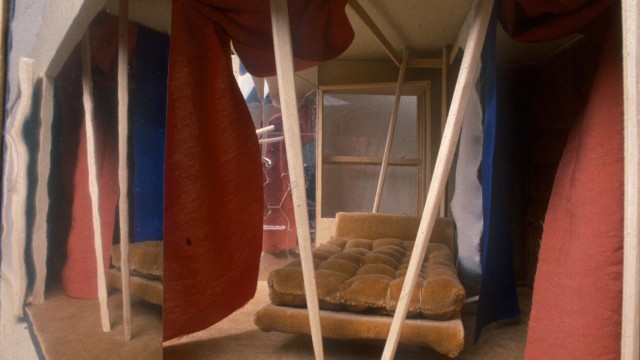 Architect Carlo Mollino was born in 1905 and trained at the Polytechnic in Turin, where he graduated in 1931.

Invited by the magazine “Domus” in 1943 Carlo Mollino created a bedroom in a rice field. It can be interpreted as an extraordinary, ironic and anti-civic machine to sleep. On the minimum of surface stability, dominates a bed with white and light blue curtains which are fixed on thin timber-slats. It seems like a sort of balloon blocked up in a cubical surrounding. It is furnished and equipped to be fully independent. Even the exterior is excluded, only visible through a setting up rear mirror. The practical and psychological aspects of the project according to its creator are to “find oneself isolated in shut in a cocoon of foam but at the same time to have the possibility to look into the world”. The same hypothesis of dividing a room – in a house in the middle of a rice field – is not by incidence but necessary to capture the spirit of the Po-Valley where the atmosphere seems to look almost like dust – as the curtains are referring to. It continues to be an interior in an interior where everything gathers itself like the imagination in a body: to be inside is equivalent to be in a spider’s net and to wait for the world’s happenings to be caught in. To conclude, Mollino seems to have reinvented a typology of the past – a bed with independent curtains – and referring to it as his heritage of surrealistic images.