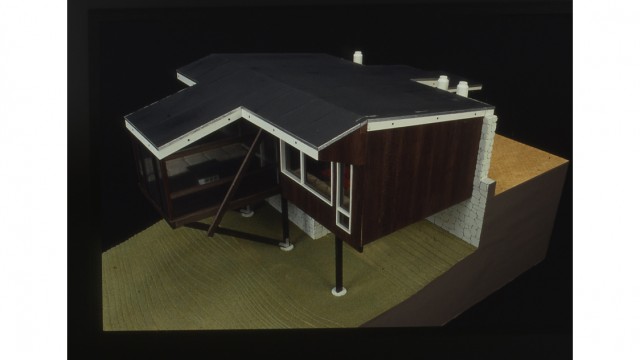 “Marcel Lajos Breuer (22 May 1902 – 1 July 1981), was a Hungarian-born modernist, architect and furniture designer of Jewish descent. One of the masters of Modernism, Breuer extended the sculptural vocabulary he had developed in the carpentry shop at the Bauhaus into a personal architecture that made him one of the world’s most popular architects at the peak of 20th-Century design.” [Source: http://en.wikipedia.org/wiki/Marcel_Breuer]

“Stillman House (1950) follows Marcel Breuer’s Gregory Ain demonstration “House in the Garden” built the year before for the MOMA Museum, which now sits at the Rockefeller Kykuit estate in Hudson Valley, NY. The Stillman house boasts three separate architectural commissions by Breuer between 1950-1953: a main house, a studio, and pool and porch redesign, with the latter featuring an 18’x10’ pool mural wall by friend and sculptor, Alexandar Calder. During this time, fellow first-generation Bauhaus friend and artist, Xanti Schawinsky, executed an interior mural wall as well.

Stillman house sits adjacent the Huvelle House (1953) by John M. Johansen and together, they represent the first and second modern homes in Litchfield, Connecticut, existing between a forest reserve and the town’s historic North Street. In 1953, the Stillmans decided to split their 6-acre property in two, inviting the Huvelles to join their modern experience on the condition their choice of architect was to remain modern. John Johansen, fellow Harvard Five architect and student and associate of Breuer, built the adjacent home. The house is a study in simple form, natural light, and thoughtful design. It also sits in complementary juxtaposition to the Stillman House in appreciation of its patterned use of glass, primary color panels and pool mural.

Although Stillman House was the beginning of a client-architect friendship and collaboration that spanned 30 plus years, the house serves as important reminder to what creative thinking and out-of-town influence can do. To date, and in reaction to these homes, the Borough of Litchfield restricts the further use of modern design within its borough’s historic boundaries as protection to its Colonial and Greek Revival heritage. Nevertheless, what has become clear to everyone familiar with these homes is just how complimentary and special they have become in telling the history of Litchfield’s architectural heritage. The 6-acre property is now reunited, and the homes are fully restored to their original detail.”  [Source: http://en.wikipedia.org/wiki/Stillman_House]