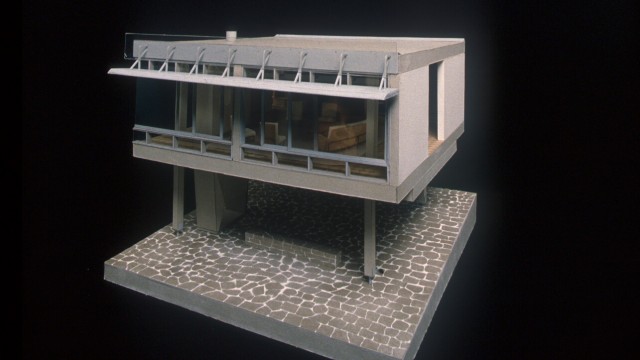 In 1954, June Halvorson Alworth commissioned a house in Duluth, MN. Because Alworth was widowed and subsequently married Robert Starkey, the house was known as both the Alworth and the Starkey house. Breuer designed the residence to take advantage of its site on the shores of Lake Superior. Two large, rectangular volumes of unequal size were cantilevered over the side of a hill and supported by wood columns and laminated girders. One contained the bedrooms and children’s playroom. The other contained the open-plan living and dining rooms arranged around a central hearth. This space organization is known as the “binuclear plan”.  Laminated wooden girders on the roof of the living-dining wing provided additional support. The upper volumes of the house were clad in board-and-batten siding, and the facades facing the lake featured large expanses of windows shielded by glass sunshades. The opacity and solidity from the front approach belies the transparency and openness at the rear of the home. Breuer paved the area underneath the cantilevered volumes, defining the space through the use of planar, fieldstone walls and a massive outdoor fireplace. Details of the house suggested marine imagery, particularly the gangplank bridge suspended from wires and staircase banisters evocative of ship rails. A separate volume constructed of fieldstone and painted brick contained the garage. The house became one of Breuer’s most famous after it was featured in the October 22, 1956 issue of Time Magazine.