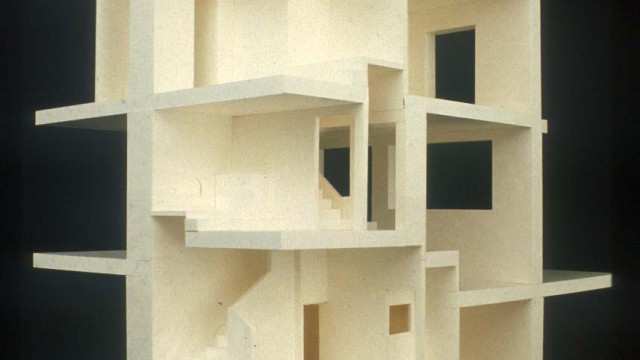 This house was one of toughest plans we met when we tried to make a reconstruction of the interior. There are only a few photographs of a cutout model available. Also a reconstructed floor-plan from 1981 exists. However this does not simplify the work while it inhibits the creative thoughts. There is one entrance, from where the living and service areas split up. Kitchen and dining-room are often on separate floors in a Loos house but connected with a dumb waiter. The flat roof is not designed as a terrace. This is our starting point. Other sources like Behalova state in 1974 that this is a Kulka design and a preliminary study for his ‘Weissman Hause’. Rukschcio doubts this, and thinks that the similarity is a sheer accident, because of Kulka’s lack of refined proportional feeling. When we look at the Boiko house (207) witch is designed by Loos and Kukla together, we can also find similarities, so it could also be its pre-design. All together it is not impossible that Kulka was involved in this design for he was one of the chief contributors to Loos’s work in this period. The dating of this hous was another problem, but the historians placed it in a row with Müller, Moller and Winternitz so it had to be 1929. I am sure that the final word is not yet spoken about this house.