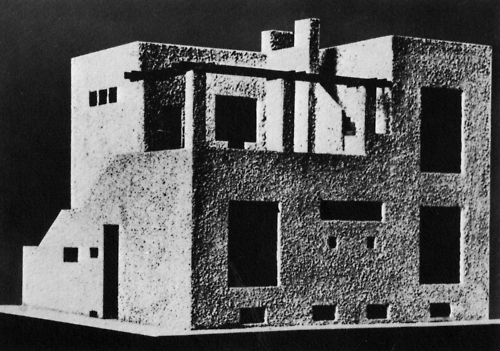 The reconstruction of some projects by the architect Adolf Loos was one of the issues addressed by ‘Atelier of’ Architect Walter Angonese during the fall semester 2011/2012 ‘Academy of Architecture in Mendrisio. The attached pictures show an example of these models, made in 1:20 scale, and in particular Moissi Villa (1923), designed by Loos in Lido di Venezia, but never realized.

The eastern façade of this building and cubic terraced, from a purely Mediterranean, would be completely balanced arrangement of its windows, walls, if the blade was not, for a large portion of the upper floor, torn apart by trellis terrace.

House for the actor Alexander Moissi and his wife on the Lido of Venice. The house itself is a heavy plastered cubic design cut open to the top. The living is upstairs due to the view to Venice. The exterior staircase next to the entrance goes to the terrace near the drawing room.