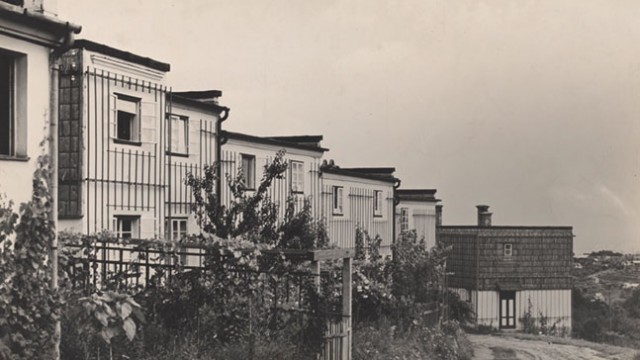 Adolf Loos  was an Austrian and Czech architect and influential European theorist of modern architecture.

Loos had three tumultuous marriages that all ended in divorce. He suffered from poor health, including an inherited hearing affliction, and was involved in a pedophilia scandal. He died aged 62 on 23 August 1933 in Kalksburg near Vienna.

Strictly speaking, it is in the Heuberg settlement for two around the same time and in the immediate.

Barer neighborhood built settlements , settlement ‘ Vienna -West ” with 129 residential units and the settlement” Am Heuberg ” with 40 residential units.
1921 entrusted the city of Vienna , Adolf Loos as chief architect of the settlement office together with Hugo Mayermit planning Heuberg settlement. The future residents , mostly working and shelter lots, had to commit to the performance of 3,000 hours of work. The pioneering in many respects ” model settlement Heuberg ” was built in the years 1921-1924 according to social aspects ,  the two-storey homes were cost-saving applied in line construction and provided with compressed gravel roofs and wood shingle cladding .

Settlement of the concept represented the creation of kitchen gardens through which the supply of the inhabitants should be ensured with food .
Today, the ” Loos – settlement ” received only fragmentary am Heuberg , many of the homes have been completely refurbished over the decades , a number of front gardens are now used only as a parking.

These houses are build after the one-wall construction method that was developed by Loos. This method was also the bearer of the “raumplan”.

A raumplan is a planning method based on discreet rooms and a dynamic section. This method places great emphasis on the scale of individual rooms and often requires steps into each room or cluster of rooms. The method largely belongs to the architect Adolf Loos and requires a high level of structural awareness and ability to model spaces.