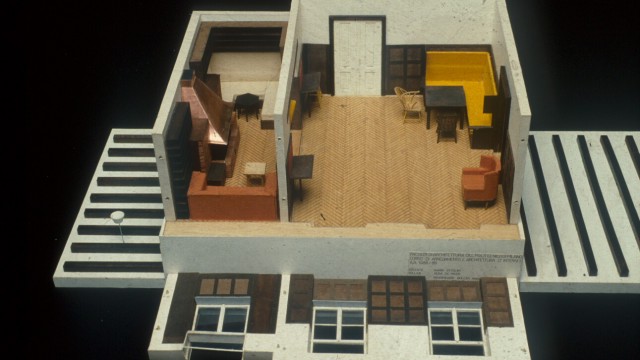 Brown living room (now in museum) and white sleeping room. Here you will find the adaptation of the furniture of the public house in the environment of a house. A bench along the wall surrounding the table forms the major issue suggesting this pub similarity. In his bedroom, the bed and the floor, were covered with white furs.

” The modern man who holds the ornament sacred as the useless remains of abundance of epochs long past will immediately recognize the arduous, spoiled, sickness of the modern ornament. No one living on our level of culture these days can create ornament anymore.” – Adolf Loos

Adolf Loos was a functionalist who believed in simplicity. He had traveled to America and admired the work of Louis Sullivan. He felt that lack of ornamentation was a sign of spiritual strength, and his writings include a study about the relation between ornament and crime.

“… the evolution of culture marches with the elimination of ornament from useful objects.”

The Loos House was simple all right. “Like a woman with no eyebrows,” people said, because the windows lacked decorative details. For awhile, window boxes were installed. But this did not solve the deeper problem.

“The dishes of past centuries, which display all kinds of ornaments to make peacocks, pheasants and lobsters look more tasty, have exactly the opposite effect on me… I am horrified when I go through a cookery exhibition and think that I am meant to eat these stuffed carcasses. I eat roast beef.” – Adolf Loos, “Ornament & Crime”.

Adolf Loos was a precise observer of his time and new cultural forms. He rejected the ornament with an economic argument because he equated it with wasted manpower.

“Through Adolf Loos a new and advanced type of spatial thinking came into the world. The free thinking in space, the planning of rooms, that lie on different levels and are not bound to any continuous storey, the combination of interconnecting spaces to a harmonious, inseparable whole and to a spatially economic object. Depending from their puropose and significance the rooms not only have different size, but also different heights”.