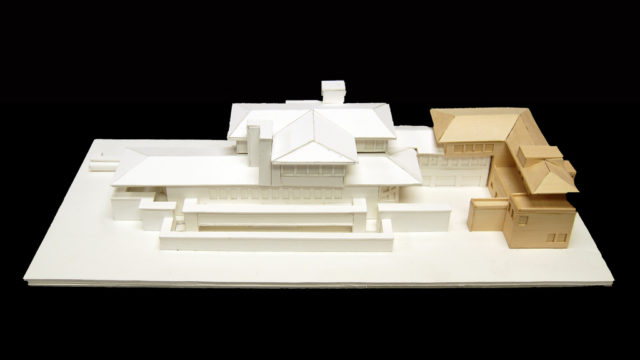 The Robie House is one of the best known examples of Frank Lloyd Wright’s Prairie style of architecture. The term was coined by architectural critics and historians (not by Wright) who noticed how the buildings and their various components owed their design influence to the landscape and plant life of the midwest prairie of the United States. Typical of Wright’s Prairie houses, he designed not only the house, but all of the interiors, the windows, lighting, rugs, furniture and textiles. As Wright wrote in 1910, “it is quite impossible to consider the building one thing and its furnishings another. … They are all mere structural details of its character and completeness.”

The projecting cantilevered roof eaves, continuous bands of art-glass windows, and the use of Roman brick emphasize the horizontal, which had rich associations for Wright. The horizontal line reminded him of the American prairie and was a line of repose and shelter, appropriate for a house. The exterior walls are double-wythe construction of a Chicago common brick core with a red-orange iron-spotted Roman brick veneer. To further emphasize the horizontal of the bricks, the horizontal joints were filled with a cream-colored mortar and the small vertical joints were filled with brick-colored mortar. From a distance, this complex and expensive tuckpointing creates an impression of continuous lines of horizontal color and minimizes the appearance of individual bricks. The design of the art glass windows is an abstract pattern of colored and clear glass using Wright’s favorite 30 and 60-degree angles. Wright used similar designs in tapestries inside the house and for gates surrounding the outdoor spaces and enclosing the garage courtyard. Robie’s generous budget allowed Wright to design a house with a largely steel structure, which accounts for the minimal deflection of the eaves.The planter urns, copings, lintels, sills and other exterior trimwork are of Bedford limestone.