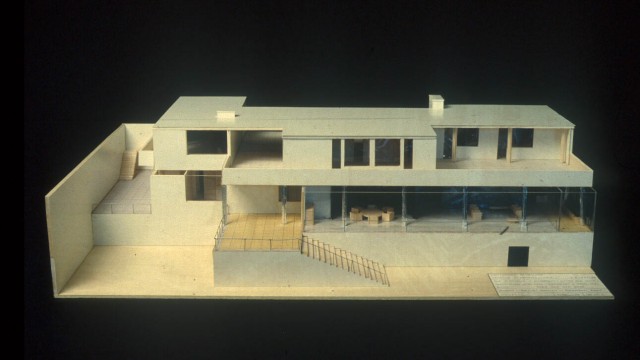 Villa Tugendhat is an historical building of modern architecture. The Villa is located in Brno, Czech Republic and was designed by the German architect Ludwig Mies van der Roche. This icon of modernism was buit between 1928 and 1930 for Fritz Tugendhat and his wife Greta.

The free-standing three-storey Villa is situated on a sloped terrain and faces to the south-west. The first storey, the basement, contains the utility facilities. The second storey, the ground floor consists of the main living and social areas with the conservatory and the terrace as well as the kitchen with facilities along with the servants’ rooms. The third storey, the first floor, has the main entrance from the street with a passage to the terrace, the entrance hall, the rooms for the parents, children and the nanny with appropriate facilities.

The furniture of the house was primarily from tubular and strip steel as well as from noble woods (rosewood, zebra wood and Macassar ebony) and it was designed by Mies van der Roche and his colleagues (Lilly Reich and Sergiues Ruegenberg). Two armchairs designed for the bulding, the Tugendhat chair and the Brno chair, are still in production.

Three “Tugendhat” chair – a hybrid of Mies and Reich’s 1929 Barcelona chair and 1929-1930 Brno chair –  stood in front of the onyx wall upholstered in silver-grey “rodion” material. They have a large padded leather seat and back, supported by leather straps moundted on a steel frame and legs and the frame is flat solid steel, formed under into a C-shape under the seat to create a cantilever.