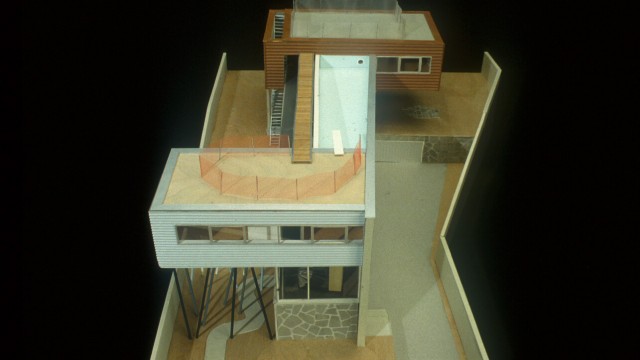 Rem Koolhaas, was born in 1944. He started his career life as a journalist, and as a film screenplay writer in Amsterdam. Then he left London to study Architecture at The Architectural Association School. In 1972, in the city of New York he started to analyze the impact of Metropolitan Architecture.

Initially, the client wanted a house that was kind of an update of the Villa Savoye of Le Corbusier version, he wanted a glass house placed in the field of property, west of Paris. The house is located on Avenue Clodoald, 92210 Saint-Cloud, in the residential area of a hill that descends steeply towards the Seine, the Bois de Boulogne and the city of Paris in France. The site is like a big room with a border made of green spaces, garden walls and slopes. It consists of three parts: a sloping garden, the main volume of the villa and garage at street level with access to a cavity. The house is conceived as a glass pavilion containing living and dining areas, with two perpendicular apartments moving in opposite directions to take the view that seem to float. They pool, which is supported by the concrete structure covered by glass pavilion added. The idea was to create on main floor with a social area which were remarkable feature given the fluidity of space that allowed simulating thus, a “continuation of the park inside the house”. For this reason we note the almost total absence of furniture, in fact, the small amount of furniture is oriented longitudinally (along the lines of the side walls) so as not to set limits marked. In turn we can highlight the presence of large windows around its perimeter which makes the “internal – external environment” relationship. The apartments cantilevered beyond the central volume hovering over the garden. Referring to the intimate area, we can say that we also note a well marked between the two bedrooms, so division, the bedrooms act as individual departments, so as each of them has its own area of services and a staircase that allows access independently from the main plant. On this floor there is the presence of two bathrooms, one serving each room, located in rectangular volumes retracted behind the exterior walls.