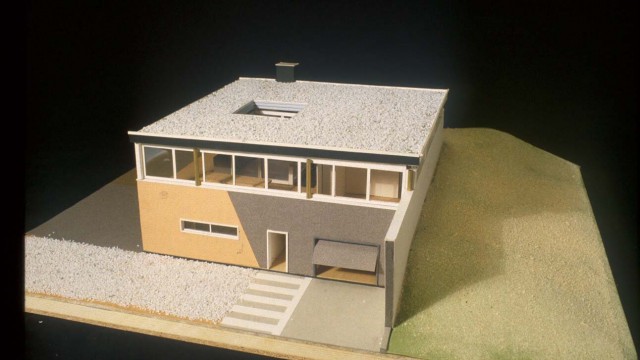 About the Architect :
Rem Koolhaas, was born in 1944. He started his career life as a journalist, and as a film screenplay writer in Amsterdam. Then he left London to study Architecture at The Architectural Association School. In 1972, in the city of New York he started to analyze the impact of Metropolitan Architecture.
About the House :
In a parody of the classical Dutch section of houses in the slope of a dike, this house was projected on the raised embankment of a highway that was never built. On the north, the road and the entrance level are one level below the main site. The garden and the main area of the house – on the higher level – are defined on the south by a canal.
On the main floor of the house – more or less a square – a patio is placed in such a way that it generates, in combination with a free-standing wall, the living spaces of the house: a living area to the south, a dining zone to the north. The wall defines two “rooms” – a bedroom and a study – connected by a secret corridor that also gives access to the bathroom.
The garden elevation consists of four different kinds of glass – armoured, clear, etched and green, that create transparencies, obstructions and intensifications.
The (metal) east wall of the patio is a kitchen, the north and south wall are mobile, and the patio floor is made of glass planks that give daylight to the gymnasium below.