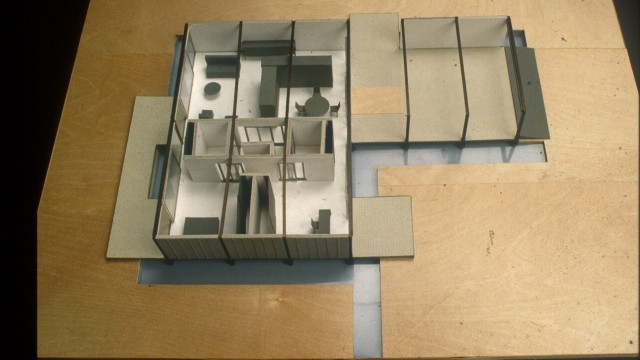 As part of the Case Study House Program, Pierre Koenig designed this beautifully articulated design made of steel, representing one of the cleanest and immacculate thinking in the development of the small contemporary house.

It represents architectural refinement in planning and execution terms, by using already available steel shapes and products which are comparable to any luxury house. It is completely surrounded by water, which is part of the integral structure and landscape element, by using the reflection of the residence on the water as a way to add serenity a aesthtic beauty. It has a a pool in the central court which follows this aesthetic idea. To access the living areas, there are terraces which add another plane and texture of the interplay between water and structure.

It is a fully prefabricated house made with 8” steel beams, 22′ long and separated 10′ apart. It has a living portion of 30′ x 40′ with only two columns in the interior. These colums are connected by economical panels made of steel decking on the exterior .

In addition, a simple and exciting plan is achieved by using the interior court and two bathrooms together as one element completely disengaged from the exterior walls. This central point acts as a barrier separating the living and sleeping areas. Sliding glass doors are the key points in access from the court to the living area and bathrooms, both accessible from the patio.

Even though, the interior court and pool act as the nucleus of the house, allowing light to penetrate the living area and kitchen being these a point further from the exterior. As a plus, it has an exposed roof deck spans across the beams, used to its maximum efficiency, as well as screens ovr the opening of the central court for sun protection and to give a feeling of enclosure.