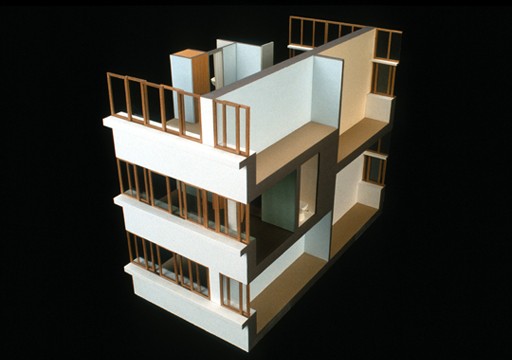 About the architect
Moisei Yakovlevich Ginzburg (4 June 1892, Minsk – 7 January 1946, Moscow) was a Soviet constructivist architect, best known for his 1929 Narkomfin Building in Moscow.

About the house
The Narkomfin Building is a block of flats at 25, Novinsky Boulevard, in the Central district of Moscow, Russia. It is a renowned example of constructivist architecture and avant-garde interior planning. The project for four planned buildings was designed by Moisei Ginzburg with Ignaty Milinis in 1928. Only two were built, completed in 1932.  Moisei Ginzburg was a Soviet constructivist architect, best known for his 1929 Narkomfin Building in Moscow.

This apartment block, designed for workers at the Commissariat of Finance was an opportunity for Ginzburg to try out many of the theories advanced by the Constructivist OSA group in the course of the 1920s on architectural form and communal living. The building is made from reinforced concrete and is set in a park. It originally consisted of a long block of apartments raised on pilotis (with a penthouse and roof garden), connected by an enclosed bridge to a smaller, glazed block of collective facilities.