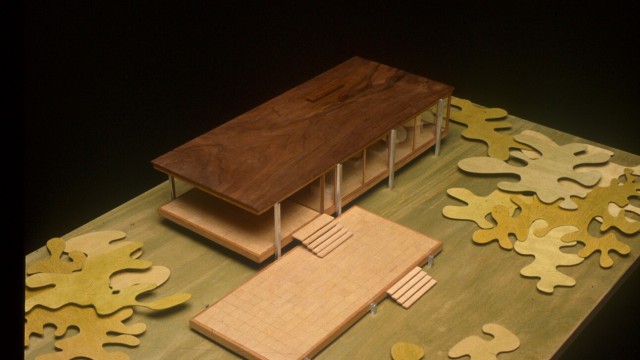 The Farnsworth House, built by Ludwig Mies van der Rohe in 1951 and located near Plano, Illinois, is one of the most famous examples of modernist domestic architecture.

The essential characteristics of the house are immediately apparent. The extensive use of clear floor-to-ceiling glass opens the interior to its natural surroundings to an extreme degree. Two distinctly expressed horizontal slabs, which form the roof and the floor, sandwich an open space for living. The slab edges are defined by exposed steel structural members painted pure white. The house is elevated 5 feet 3 inches (1.60 m) above a flood plain by eight wide flange steel columns which are attached to the sides of the floor and ceiling slabs. The slabs’ ends extend beyond the column supports, creating cantilevers. A third floating slab, an attached terrace, acts as a transition between the living area and the ground. The house is accessed by two sets of wide steps connecting ground to terrace and then to porch.

Mies found the large open exhibit halls of the turn of the century to be very much in character with his sense of the industrial era. Here he applied the concept of an unobstructed space that is flexible for use by people. The interior appears to be a single open room, its space ebbing and flowing around two wood blocks; one a wardrobe cabinet and the other a kitchen, toilet, and fireplace block (the “core”). The larger fireplace-kitchen core seems like a separate house nesting within the larger glass house. The building is essentially one large room filled with freestanding elements that provide subtle differentiations within an open space, implied but not dictated, zones for sleeping, cooking, dressing, eating, and sitting. Very private areas such as toilets, and mechanical rooms are enclosed within the core. Drawings recently made public by MOMA indicate that the architect provided ceiling details that allows for the addition of curtain tracks that would allow privacy separations of the open spaces into three “rooms”. The drapery was never installed.