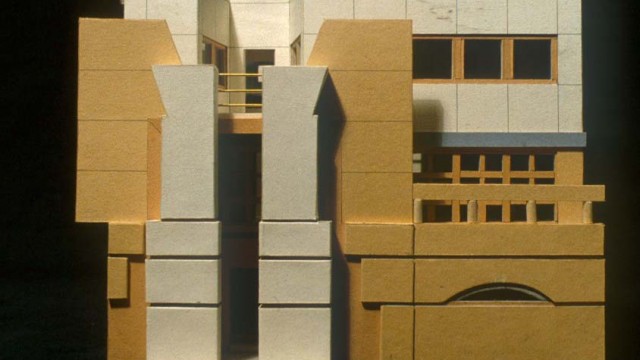 Designed and built from 1977 – 1979 by the american architect Michael Graves. This private residence is distinguished enough to be considered a contemporary architectural masterpiece holding a special spot in the country’s design pantheon. This house is mentioned in may publications as a prime and unique example of post-modernist architecture and it was constructed for Michael Plocek and his family.

Situated on one hillside, it remind an “Italian palazzo but with abstracted columns and a missing keystone that reappears as the study pavilion in the garden,” according to the Museum of Modern Art in New York City. Originally built as a 4,000 square foot home located on 1.6 acres, the house underwent some restorations a couple of years ago – including the completion of a portion that had been left unfinished.

Graves heralded a new movement in architecture with this groundbreaking home design, he connected with architectural history creating a new vocabulary of design that would inform an emerging school of thought: postmodernism.