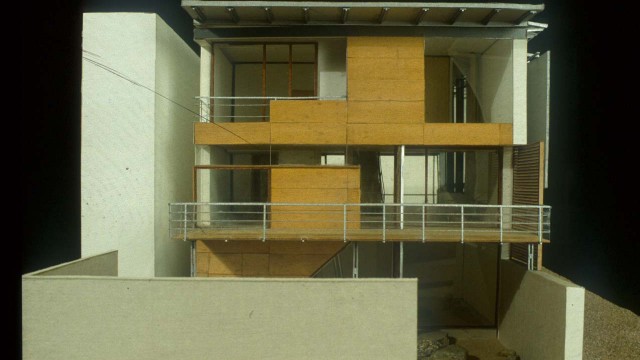 About the firm
Mecanoo is an architecture firm based in Delft, Netherlands. Mecanoo was founded in 1984 by Francine Houben, Henk Döll, Roelf Steenhuis, Erick van Egeraat and Chris de Weijer.

About the house
Mecanoo, House with studio, Rotterdam, The Netherlands, 1989. This is a private house in the Rotterdam district of Kralingen. The house was built in 1989 and design by their  owners who are architects. It expresses a longing (desire) for the landscape, the Dutch landscape and the Dutch skies. It is a house to live and work in and to be on holiday in as well, with a generous view of the Kralingse Plas to the north.

Open links are characteristic feature.  The living room and kitchen are on the piano nobile, with a generous unimpeded prospect but shielded from people looking in from outside. The ground floor studio on the other hand is closed, with a peaceful Japanese garden in which a zinc fence reflects swaying bamboo. In a platform over a ditch a children’s pool has been built, like the wooden washtub of former times.

The bedrooms and library are on the second floor. These rooms are connected by doors that look like wall panels. As the doors remain open during the day, the rooms connect with each other to form a whole. The children can run and play throughout the house. The house has a front and back door and even a side door; it is both formal and informal. Indoors is constantly in touch with outdoors and vice-versa, with a sheet of glass to keep out wind and weather.

A wide variety of materials such as stone, concrete, glass, steel and wood form a composition that is hard and soft, simple and precious, that never ceases to be comfortable, but which is also beautiful. The detailing ensures that indoors and outdoors are in constant interplay. The incidence of light is controlled by a bamboo screen that also controls the degree to which people outside can look in, especially in the evening. The house emanates openness, but at the same time the atmosphere indoors is one of intimacy.

Re-drawings and maquette by Giovanni Girardi and Matteo Origoni.