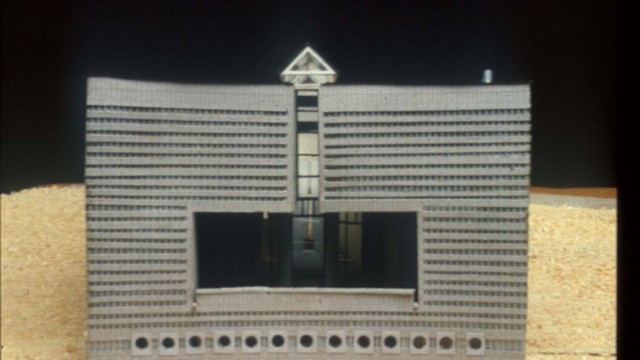 The house is located in a special condition: it is rather a residual soil between others, but a very interesting place on the edge of the hill. So the house is becoming a hinge, an articulation point between the plain and the large slope itself. There is an idea to cut out shapes in the volume like a squirrel and another one for the house itself, that is entering like a knife into the hillside, offering only the higher level as an entrance point.

The facade towards the valley belongs more to the landscape than to the house itself. Therefore the facade is concave, to collect and vibrate daylight at different times of the day. In fact there are two opposite elements, the upper cut with its relationship to the sky which penetrates deep along the entire body of the house and the lower cut of the triangular terrace, which creates an interplay between light and darkness, the idea of a cave. The movement of this facade at different times of the day is a game that is repeated by the wealth of different situations. At the sunset, for example, when the light gets less and the house loses thickness, it has several minutes more light, several minutes more life, compared to the other houses on the hill and the valley below.

This experience can be considered as an example for the small satisfactions in the work of an architect.