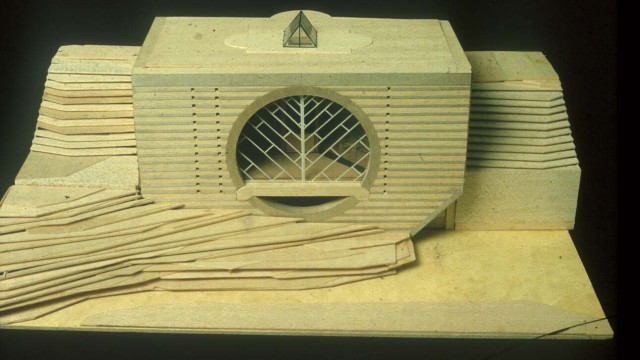 Mario Botta (born April 1, 1943) is a Swiss architect. He studied at the Liceo Artistico in Milan and the IUAV in Venice. His ideas were influenced byLe Corbusier, Carlo Scarpa, Louis Kahn. He opened his own practice in 1970 in Lugano.

Built on a steeply sloping site, the house at Massagno focuses its giant ‘Cyclops eye’ toward the view to the south. The shallow three-story structure has a triangular terrace wedged into its center behind the cicular opening in the front facade. All the living spaces of the house are oriented around the terrace, which can be closed off with huge glass sliding doors held between the double-layered front wall. The circular stair, partly pushed out the rear facade, reinforces the axial organization of the house. Skylights above the stair and the central lightwell spatially tie the three floors together and fill the house with additional light. A chromatic block banding…gives the front facade a visual richness.

“…I believe that if architecture is without these avenues, these ways out, where an architectonic object might serve to revive discussion of its destiny, of the morphology of other areas, in the long run you end up producing nothing more than caricatures, In a sense it begins with this conception of the facade as something which belongs neither to the interior nor the exterior: architecture’s separating off its different parts in this way has always been damaging. I have always learnt from history, from the greats of the past: the greater the synergy, the closer you come to the problems themselves and not a caricature of them….When you construct a block of apartments it’s because you’ve designed the street. When you produce a facade it’s because you’ve designed the square. When you produce a Pavilion it’s because you’ve thought out the park, and so on.