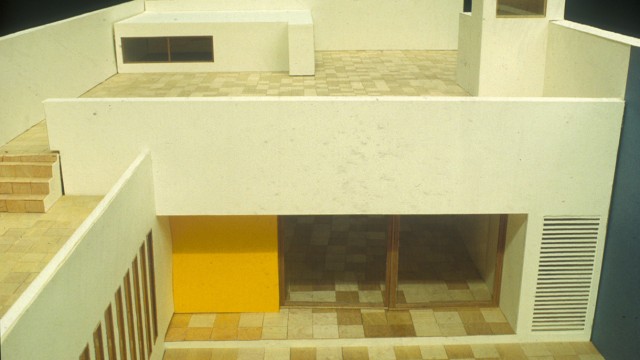 Luis Ramiro Barragán Morfín (March 9, 1902 – November 22, 1988) was a Mexican architect and engineer. His work has influenced contemporary architects through visual and conceptual aspects. Barragán’s buildings are frequently visited by international students and professors of architecture. He studied as an engineer in his home town, while undertaking the entirety of additional coursework to obtain the title of architect.

Barragán won the Pritzker Prize, the highest award in architecture, in 1980 and his personal home, the Luis Barragán House and Studio, was declared a UNESCO World Heritage Site in 2004.

About the house :
In the streets of Mexico City, in a narrow elongated area of 10×36 meters, three walls and a mediator to the front line municipal, Barragán, its 80 years of age and after almost 10 years of inactivity, makes its last work, perhaps the most paradigmatic of all.The house is located within the Federal District of Mexico, in a village called Tacubaya, which is well known and has mutated throughout the years, however it appears that the neighborhood was not what attracted the architect. Barragán accepted the job two conditions attracted by the project: the huge Jacaranda tree that should be kept in the sun and pool requested by the owner as part of the program. In fact the house is so close to the street and strengthens it.The universal message of Luis Barragán capital has answers because, as he said: “… the man has always sought to protect themselves from anxiety and fear. He tried to promote living spaces in your mind the serenity …” since, as also found by others to explain how generous: “… we have worked […] in the hope that our work […] cooperate in the great task of dignifying human life by trails of beauty and help to build a dam against the waves of dehumanization and vulgarity. If, at our work together in achieving some of these concepts do not succeed in solving the problems of man, at least cooperate to make your life fuller, more beautiful and more bearable and help to avoid the despair … ” With respect to the use of colors in an interview said that: “In my work as architect, the colors and the lights have always been one of fundamental importance. Both are basic elements in creating an architectural space, as they may vary conceptions of it. The walls are made to re-paint. I think that every two years due to all the work to repaint.