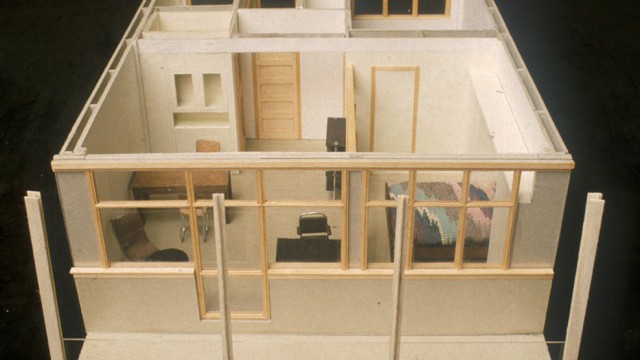 Johannes A. Brinkman, The Bergpolderflat, Rotterdam, Netherlands, 1934 (view from google)

Johannes A. Brinkman, The Bergpolderflat, Rotterdam, Netherlands, from the year of 1934. The Bergpolderflat in the Rotterdam district Bergpolder (corner of Cooper Avenue and Borgesiusstraat Abraham) was the first gallery flat in the Netherlands . The Bergpolderflat was the first high-rise project in the Netherlands specifically meant for working class-families. The galleried flats, surrounded by a collective garden and provided with three shops, arose amid perimeter blocks and became the proto-type of many post-war tower blocks. Mainly constructed with a steel skeleton, also pre-fab elements of concrete were used. The basement served for storage, laundry and a central heating installation. Besides the glazed stairwell, a lift could be used to reach the galleries and from there the individual entrances. Originally, each unit had a very economic plan, fit for day and night use by means of a glazed sliding wall, as well as a shower and a west-facing balcony. The flat has nine floors and 72 homes through an accessible gallery. There was a common washroom in the basement and modern, for the time, amenities such as central heating and the right to a free bucket of warm water. In Bergpolderflat cases were first applied generally, later, as the gallery with a balcony, central staircase and open the glass walls. There is still the traditional wooden construction beams, but with three layers is a fireproof concrete floor. The Bergpolderflat has prefabricated wooden doors.