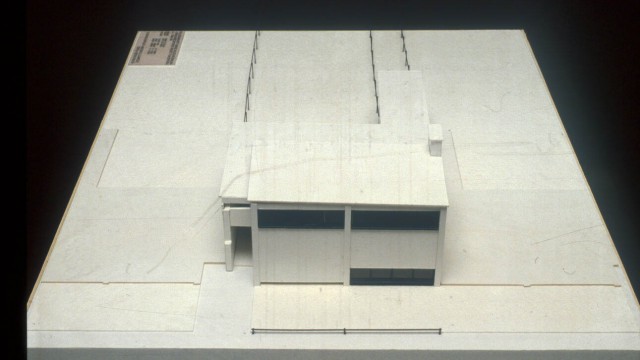 Gropius designed an estate of terraced houses with kitchen gardens measuring between 350 and 400 m2, to grow vegetables and practice small-scale animal husbandry, thus supporting self-sufficiency. In three phases of construction, 314 terraced houses were built with a floor space of between 57 and 75 m2, according to the type of house. Different variants of the house types were built in an extensive trial set up in 1927 by the Reichsforschungsgesellschaft für Wirtschaftlichkeit im Bau- und Wohnungswesen (Imperial Research Society for Economic Efficiency in Building and Housing), to provide information on the rational manufacture of residential housing, and also on the suitability of new building materials and industrial products. The building site was organized so that several houses could always be built simultaneously, by specialized labor brigades, during one phase of construction. The structural components prefabricated on- site, such as the so-called Rapidbalken (precast concrete joists), were transported via a small rail wagon and moved by crane.

The cubes, put back-to-back, form semidetached houses, and are combined in groups of from four to twelve units. The façades are divided by vertical and horizontal rows of windows; the interiors are painted in light tones. The furniture designed specifically for the project in the Bauhaus workshops found no buyers. The construction of the houses was the result of the need to economize: the load-bearing walls are made of prefabricated and inexpensive hollow slag-concrete blocks; the ceilings with reinforced concrete joists. Shortly after completion, defects in design and construction became evident and residents and owners soon began to make numerous alterations. The first changes, chiefly to reposition too-high windows, were carried out in 1934, initially according to a consistent plan. Today, therefore, little of the original homogeneity of the estate remains. The house at Mittelring 38 was the first to be restored to its original condition in 1992. Today, it is used by the Moses Mendelssohn Society, and is open to the public, as is the house at Kleinring 5. A maintenance and design statute for the protection of the appearance of the estate and its houses has existed since 1994. This aims to bring the building measures into alignment with the historical substance.