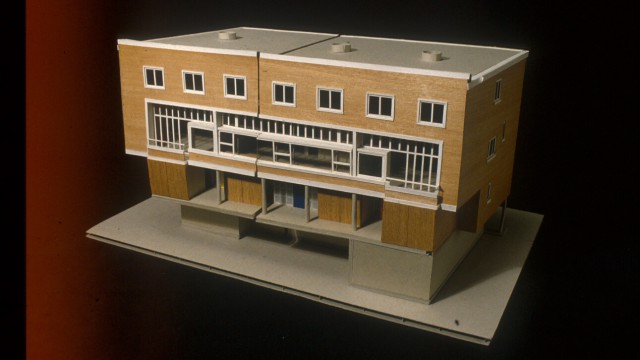 The Willow Road apartments were modeled after XVIIIth & XIXth century London terrace houses, but using modern details and materials. The use of brick and white trim could be a reference to the period building of the neighborhood, but the character of the concrete frame, large horizontal bands of steel window and flat roof are definitely and evidence of the modernist leaning of the architect. The idea related to the terraced typology is obvious in the section and the stepped condition between living and studio spaces, an idea derived perhaps from Adolf Loos who Goldfinger knew well.

Garages, entrances, and stairs occupy the street side of the ground floor and a zone of staff spaces, the spiral stairs, connects to the 2nd floor that contains the main living areas, and to the bedrooms on the top floor. A zone of circular stairs and service elements divides the overall plan so that living spaces open to both sides of the building. The ends of the building are not parallel with the facades and the division of the plan into three dwellings leaves two smaller, trapezoidal dwellings at the ends and a larger middle apartment where the Goldfingers lived.

Willow Road was influential as a prototype of a modern version of the London terraced type and was an important source for certain later projects, especially the housing designed in the 1960’s and 70’s.