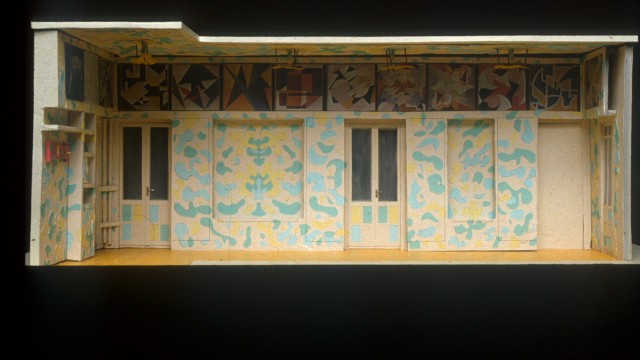 The Italian Futurist painter, sculptor and designer Giacomo Balla was born in Turin in 1871. He was self-taught as an artist and moved in 1895 to Rome, where he spent most of his life.

His early works were portraits, landscapes and caricatures, influenced by the Italian Divisionists, whose humanitarian socialist theories he shared. After visiting Paris, he became increasingly interested in painting aspects of modern industrialized life. He wrote the “Technical Manifesto of Futurist Painting” in 1910 becoming one of the most original and inventive of the Futurist painters. After the war, Balla assumed leadership of the movement, whose centre shifted from Milan to Rome.

The House of Giacomo Balla in Rome is a home-study which was designed at the time of his transfer in 1929 in Via Oslavia.

The color is the main element, because it enhances the dynamism and movement of the lines of the murals that decorate some rooms of the house, as the long corridor or the Studiolo Rosso. The painting is never interrupted, it involves the walls, the furniture and accessories such as lampshades or window glasses. The wallpaper on the walls was covered by the existing decoration, as was the case for the electrical wires and water pipes.

The Studiolo Rosso was conceived as a whole, from the walls to the ceiling where it repeats the same abstract motif, linked to the idea of speed, in the three basic tones of yellow, green and blue on a red background.