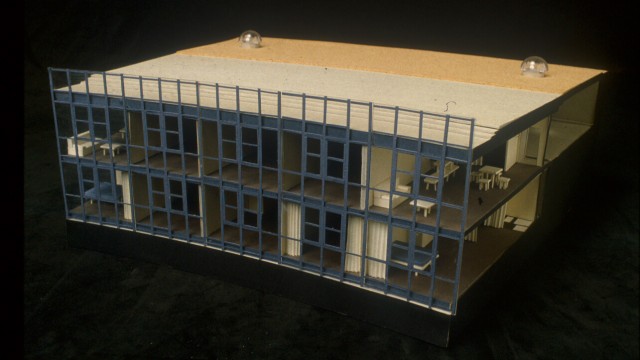 “It is very pleasant in the morning to wake up and and look outside.  Sometimes I see snowy landscapes of the cold winters in Piedmont, sometimes the bright colors of spring. The architecture enjoy seasons, those who inhabit it keep track of the changes, the colors, the shades, tones of light. The Residence lies on the ground by agreeing with its steep gradients, the convex façade is practically hidden by a green blanket and the flat roof becomes an extension of the surrounding terrain. For those approaching or in search of the residential center of the Interaction Design Institute, the building is literally hidden in the countryside.

Aimaro Isola says during a video interview : “(… ) We have built a building that is not seen in a very nice place in front of a hill, almost like an amphitheater, we have built a large scythe, a large arch covered of soil at the top of which people could look at nature as if it was the stage of a theater.” There are two types of apartments: simplex and duplex. The first , for 1-2 persons (80 sqm), has a sleeping area with bathroom and a large living room with kitchenette. The second , for 3-4 people (120 square meters ), is on two floors: the sleeping area, kitchen and living room on the ground floor. Many of the units still welcome antique furniture designed by Ettore Sottsass.

Still lingers in these environments enlightened spirit of its founder. Its new use as an ideal home here in Ivrea idea is realized: that of an open search, academic and not notional, based on experimentation, collaboration and synergy of young people from the most diverse backgrounds and education: from India to the United States, from the psychologist to the architect. In is an illuminated place in every ways. Just as the mind and thoughts of those who want to live here, and exactly like the designers  expected.”