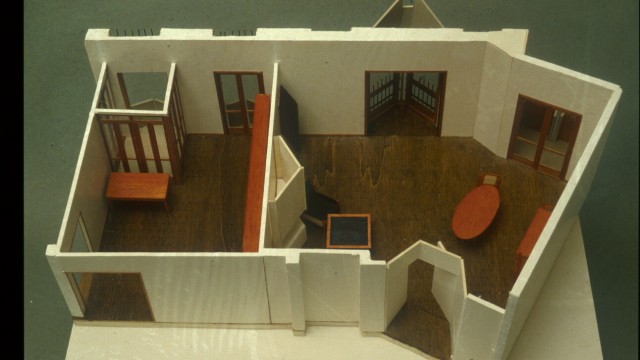 The Bottega d’ Erasmo Roberto Gabetti (1925-2000) and Aimaro Isola (1928) is the most important work in the architectural landscape of post-war Italy and one of the most debated cases of Italian architecture of the second half of the 20th century because it is a manifesto against the “tradition” of the modern movement. The text accompanying the project, published in “Casabella-Continuità” in 1957, opened a debate on the character “neoliberty”. The building is commissioned to the two young architects by the Turin Bookseller Angel Barrera, who asked for their design of an antiquarian bookshop and adjoining residence on a plot destroyed by bombing in the Mole neighbourhood. Gabetti & Isola designed a building of five floors above ground plus one set back from the facade. The bookshop goes from basement to the second floor, while the upper ones are the accommodations. Inserted into the historical center of Turin, the bookshop emerges with a different language ​​and material: part of the front is in exposed brick , supported by a plinth in Lucerne stone, a material that also occurs in the parapets and the crowning of the bow-windows. The façade is characterised by thick vertical bands that contain to-ceiling windows, and a stairwell overlooking the inner courtyard. The furnishings in the library are designed by the same architects.