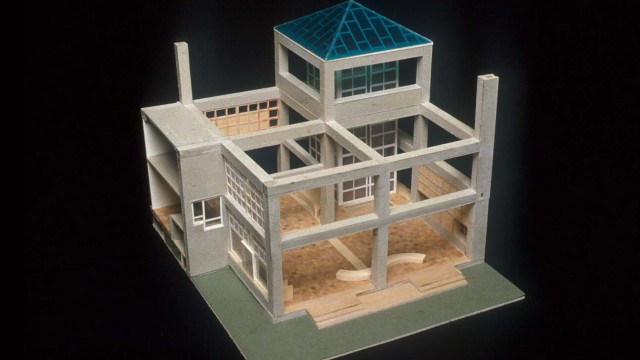 A major figure in Japanese architecture since the late 1950s,Fumihiko Makiis recognized for his architectural and urban design work as well as his contributions to architectural theory. Fumihiko Maki’s work is characterized by his critical development of the modern model, his desire to create a contemporary urban architecture and spaces of public appearance, and his attempt to fuse design concepts of the Hast and West. Fumihiko Maki is known for Fumihiko Maki’s rational approach, intelligent combination of technology with craftsmanship, and delicate details, all of which are illustrated in projects for cultural, residential, commercial, educational as well as office, convention, and sports facilities.

The National Museum of Modern Art has been called the most nearly classical of Maki’s works. The exterior of the museum is an opaque gray, but in the atrium, wall surfaces of rough and polished marbles provide a reflection of light patterns coming from above. The lobby is an extraordinary example of the power of an empty space. The Iwasaki Museum for a private collection of art was completed in 1979. This modern acropolis is built atop a hill in southern Kyushu. YKK Guest House, built to provide lodging for visitors to one of the world’s largest fastener manufacturers, is a perfect example of what was cited by Bill Lacy, writing in Space Design, as an

example of a great architect’s understanding that “stone and steel, glass and concrete are not what architecture is made of-they are only the means by which light is allowed to create form and space.”