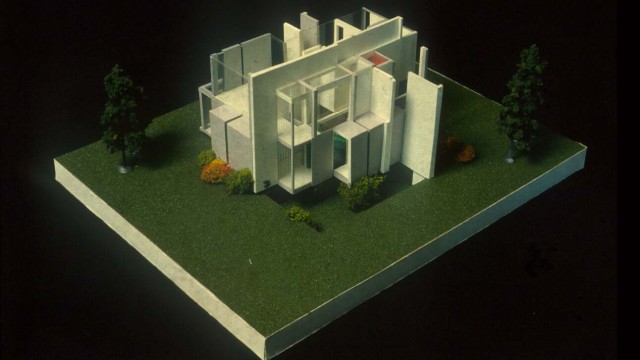 House VI, also known as Frank Residence was designed for Mr. and Mrs. Richard Frank. This house is located on a flat site on Great Hollow Road near Bird’s Eye Brook in Cornwall, Connecticut and has become famous for both its revolutionary definition of a house as much as for the physical problems of design and difficulty of use. Eisenman at the time was recognized as a theorist proclaiming a formalist approach to architecture he calls “post functionalism”, that is defined byabsence of functionalism. Thus, the design appeared from a conceptual method that start with a grid and remains held to that conceptual framework. To start, he created a form from the manipulation of the grid, that divide the house into four sections, successively manipulating the structures until materialise coherent spaces. However, some structural elements are just incorporated to increase the conceptual design purposely ignoring the idea of form following function. For example in the kitchen there’s a column that hovers over the kitchen table, not even touching the ground. He made it difficult for the users to live with reminding that they would have to grow accustom  to the architecture. In the bedroom there is a glass slot in the center of the wall continuing through the floor that divides the room in half, forcing  the couple to sleep in different beds. Another curious aspect is an upside down staircase, the element which portrays the axis of the house and is painted red to draw attention. However the house was difficult to live, he succeeded in building a structure that functioned both as a house and a sculptural work of art, changing the priority of both so that function truly followed form.