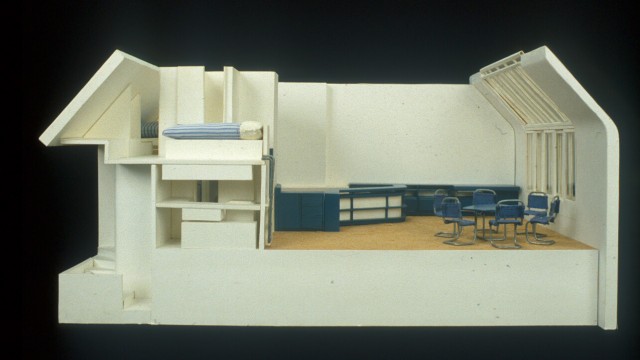 Wells Coates converted the top floor of 18 Yeoman’s Row in Knightsbridge, London into a studio flat for himself. This residence was the architect’s primary home by early 1936 and would eventually become his workplace too until 1956. The flat was a radical step of departure from the impersonal spaces being built at the same time. The architect considered for how each space was to be used and filled it with details such as window garden of exotic plants and the careful arrangement of inbuilt furniture. The built-in objects were creating small zones in the space. The main feature was the ‘hearth scene’, which was a bookcase on one side and a back-rest for cushions on the other.

Wells Coates was one leading protagonist: he played a great part in the various attempts to establish the resistance movement against “ancestor-worship in design”he was an engineer and scientifically minded but he was able to express his profound belief in certain architectural principles.

Through the 20th Century Group, and other groups, he helped to bring modern ideas in art as well as architecture to the British scene. His part in MARS and CIAM was especially directed at exploring the common ground between architecture and engineering;

Coates was cutting off from how commercial housing interests were constructing buildings that were “neither homes nor architecture” and the project of studio flat was one of his public responses to their deficiencies.