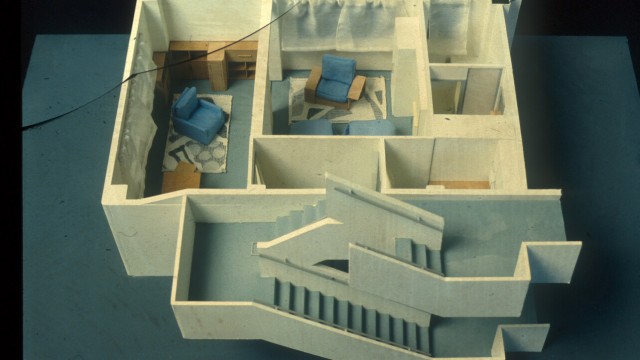 Lawn Road Flats (also known as Isokon Flats) was Wells Coates’s first building. Now internationally recognized as a key building of the British modern movement, it began as a design for two houses for the clients, Jack and Molly Pritchard – founders of the Isokon firm in 1931.

The Pritchards purchased a plot of land at Lawn Road, Hampstead, London (near to Belsize Park Underground station) and commissioned Wells Coates to design and build a block of serviced flats. The flats, are an attempt to answer the constraints of modern living by providing the simplest accommodation which would give maximum comfort from minimum materials. Coates placed flats in a four storey block of thirty-four flats with two roof-top penthouses. It was built of reinforced concrete with cement wash render, the main elevation facing Lawn Road featured a cantilevered stairwell to the left, giving access to cantilevered balconies that are carried the full extent of the elevation.

During the time Lawn Road Flats were said to be ‘more like the machine a habiter than anything Le Corbusier ever designed’. Famous residents include the author Agatha Christie and Walter Gropius, the founder of the Bauhaus school and an architect himself.