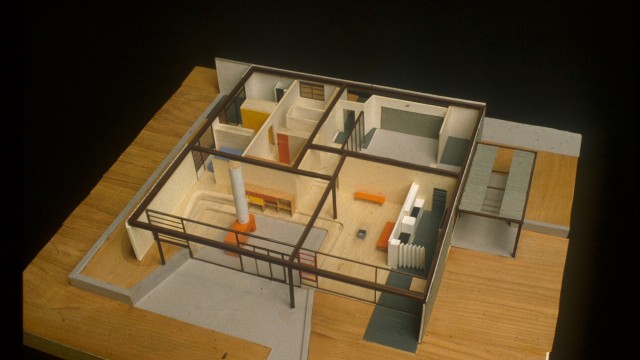 Charles Ormond Eames, Jr (1907–1978) and Bernice Alexandra “Ray” Eames (1912–1988) were husband and wife American designers who made significant historical contributions to the development of modern architecture and furniture. Among their most well-known designs is the Eames Lounge Chair. They also worked in the fields of industrial and graphic design, fine art and film.

This house is  part of the Case Study houses aimed at various arquitects to design and build inexpensive and efficient model homes for the United States residential housing boom caused by the end of World War II and the return of millions of soldiers. First designed in 1945, it was constructed in 1951 without many changes to it’s original idea.

It incorporates the land as part of the living scene, offering an intimate association of the life inside with the environment, making available a unobstructed wiew of the meadow and onto the Pacific.

Made of steel and ferroboard roofing materials, corrugated glass and pylon plastic. It is a one floor residence, with a principal entrance only separating the interior and exterior spaces by a transparent wall. It isolates life from in the residence only by curtains on the front view, and three walls which delimit the rest of the living space.

It is built with four steel columns in the centre whic give a sense of cross bracing and continuity. It is composed of a large social area, divided into the basic-need spaces such as eating, living, entertainment… by flowing stairs which divide naturally the basement without abrupt changes or obstacle walls.   It is designed to be integrated and complete within the defined limits of needs and purposes of the time (lack of material, tight budgets, etc). It was also designed to lack extreme privacy or aislement, but to be open and enhance living interaction.