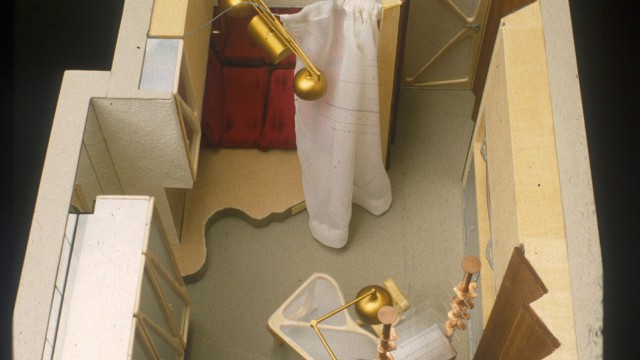 A rather small project by Carlo Mollino is the never realized camera-studio for Ettore Caretta in Turin in 1941. It has a surface of only 15m². The curve is the most striking element in this interior and can be found everywhere: desk, floor, walls…The curve is deviated by the flow and moving of human in space. The walls are planked and a curtain can be used to separate the room. Remarkable is an armoire made of aluminum. In his designing plans Carlo Mollino proposes different locations to place the bed in order to demonstrate the potential of the flexibility in this system. The maybe most extraordinary piece is the desk made by maple-wood and glass including a cupper, room-high column functioning as a shelf with around moving surfaces of glass.

Born in Turin, Piedmont, Carlo Mollino was the son of Eugenio Mollino, an engineer. As he grew up, Carlo Mollino became interested in a variety of topics that were as outrageous as his art, such as design, architecture, the occult, and race cars.

He was once credited as saying, “Everything is permissible as long as it is fantastic.” That credo was certainly reflected throughout his body of work. Mollino’s architecture and furniture are famous for their ability to enable occupants to manipulate volumes at a whim.