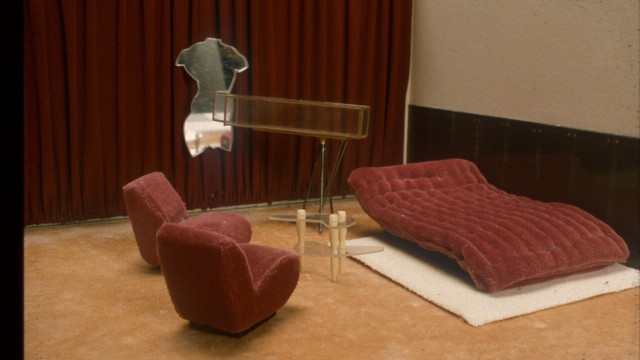 The Casa Miller by Carlo Mollino from 1938 is a two-room apartment and studio with bathroom but without a kitchen in the Via Talucchi in Turin. The particularity of the apartment was its very expressive interior furniture which was inspired by the spirit of modernity with classical athletics and surrealism: Mollini used mirrors to trick the impression of perspective as well as coloured panels and transparent surfaces. Consequently the visitor became a feeling of alienation. The elegant apartment had also a particular usage: the famous architect, designer and photographer used and furnished it to make photographs inside of his countless affairs with prostitutes which were not meant to become ever public. Because of the endless mirrors the photographer becomes part of his pictures taken in a seeming to be endless room. Its theatrical atmosphere is also stressed by the number of chairs and beds: they are too many to sit on and too many to sleep on. Probably the most striking fact about Casa Miller is that in this case the architecture with its dark and morbid interior becomes first of all a theatrical self-staging for its creator, which expresses rather himself than the design of the objects themselves: an architecture born from the autobiography of its master.