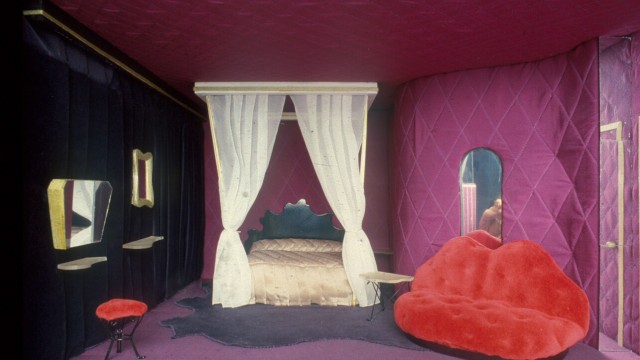 Casa Devalle is an apartment designed by Carlo Mollino in 1940 for his friend and architect Giorgio Devalle located in Turin. Similarly to his earlier work, the casa Miller, this interior is also inspired by the world of dreams and surrealism. Mollino was inspired by the works and paintings of Hans Arp, Salvador Dalí, Man Ray, Giorgio de Chirico. In his works, Mollino created surreal, opulent interiors that broke all the rules. At the Casa, he juxtaposed antiques with his own over-modern designs. He coated surfaces with fleshly feminine velvet, exotic furs and silks. The bed was topped with a green mirrored headboard and a lip-shaped couch smouldered below. For Devalle he created a “garconniere” – or shag pad – to match any boy’s fantasy. The atmosphere of the interior can be described as whorehouse-like, based on feminine and erotic colours like rose, red and purple. The design forms are deviated from nature, Art nouveau, Baroque and Rococo and are reflecting his search for beauty: wall paneling in old rose, voluminous upholstered furniture, filigree chairs made by metal, inspired from the era of Louis’ XIV, glass and mirrors. A figurative example for the erotic scenery and the will to show the relationship between human and its surroundings in the house is a divan in the shape of lips.