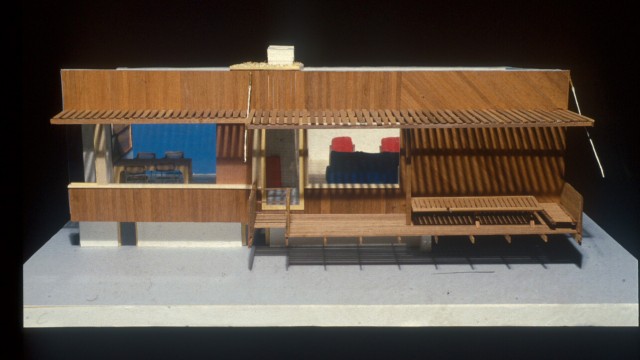 Breuer House I is located in Connecticut as Breuer House II, New Canaan set on a gently rise having particular view to ornamental trees. The vigorously horizontal-lined house’s most dramatic feature is the cantilevered upper floor with it’s deep corner balcony suspended from tension cables of standard marine rigging. This daring yet disciplined use of the cantilever was the structural theme of this hillside house. Breuer had been experimenting with using frame walls as trusslike members, and here this potential inherent in wood frame construction is exploited to the utmost. The two ends of the front facade is supported by fieldstone walls relieving the effect of the overhangs (http://en.wikipedia.org/wiki/Marcel_Breuer).

Like the Noyes House and the Stillman House I, it was built to an appropriate, human scale, not too big, not grandiose (although it has been expanded and its cantilevers buttressed since Breuer built it).

In the late 1980s the concrete-block base was also covered by fieldstone weakening the original utilitarian impression of the original house. The top floor is clad in vertical and diagonal wood overlay. The ribbon window at the second floor stretching on the main facade shaded by a wood brise-soleil. The structure of the cantilevered stair to the corner porch is in steel as a reply to the balcony supporter cables (http://architectuul.com/architecture/breuer-house-i-new-canaan).

The walls interior were covered with painted plywood, cypress boarding, and natural gum plywood. The floors’ overlay were Haitian mattings, bluestone, and black asphalt tile. The strongly painted surfaces, like on the north wall in the living room’s cobalt blue colored wall created emphatic effects within the house.