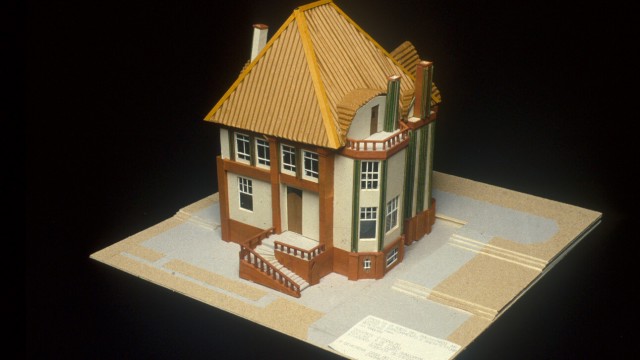 Behrens house was built on the outskirts of Mathildenhöhe ( Darmstadt – Germany ) in 1901 and designed by the German architect Peter Behrens, who was also in charge of the details of the interior (furniture , towels, paintings, ceramics , etc.) . Built as his private residence, it was soon put on sale and served mainly to his professional reputation. The exterior is brick and stucco, with wooden interiors. The house is organized around the dining room and the music room, while the bedrooms and the study are upstairs . Even if it falls in the Art Nouveau style, it has been said by some that recalls the German vernacular architecture, especially in the shell. The Behrens house was partly destroyed during the Second World War. Its construction is considered the turning point in the German architect profession, when he left the Monaco of Bavaria artistic circles and withdrew from Jugendstill to approach a design style more sober and austere .

The dining room, as well as the other rooms of the Behrens house, was considered a work of art , as well as being endowed with great functionalities.Tutta its design has been subjected to an ornamental principle in which the flow lines come and go, as if it were beams of light. The entire decor was bought by a physician in Berlin in 1950. Two chairs and two armchairs in this collection were sold at an auction in Monaco of Bavaria in 1988 and now in the Museum Kunstler – Kolonie , Darmstadt, and the Wolfsonian Collection, Miami Beach, Florida. Another chair was sold at auction in London in 1999.
Documents of the time show that the ensemble was manufactured in 1901 at the request of Emilie Reif Nurnberg.
Doubt if the furniture appeared to come from Berlin Behrens House or from the dining room of the family Nurnberg has not yet been dissolved. However, since Peter Behrens moved to Berlin in 1910 ( where he died in 1940), and took with him his furniture from Darmstadt, is supposed to come from there.