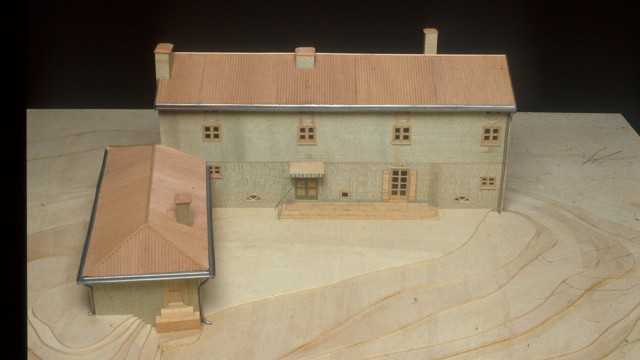 Erik Gunnar Asplund (22 September 1885 – 20 October 1940) was a Swedish architect, mostly known as a key representative of Nordic Classicism of the 1920s, and during the last decade of his life as a major proponent of the modernist style which made its breakthrough in Sweden at the Stockholm International Exhibition (1930).

During the years 1917-18 Asplund designed a villa at Djursholm for bank director Snellman. It was a simple yet subtly complicated structure comprised by a two levelled main wing and a kitchen wing in angle to it. The building is like as if it was cut out of a block and has an unusual small house-depth. This circumstance meant that all rooms faced the garden. In order to still create a connection between the garden and the entrance side, the hall is consistent along the house breadth. This room received a glass door with glass sections aside the main entrance door. With this solution a summer entrance and all season standard entrance was established. The two doors are very different, and are yet kept together by a common stair-section.

On the top floor there is an oval room from which a straight corridor is based. Its walls are not parallell. One wall is skewed to the other. The facing is smooth and simple with rows of barred windows, of which one has twice the bars as the others. Note also that lower window row successively displace itself to the one above.

The house is built in processed wood. The facings are light grey with window and door sections in white. Irregularities in the facing, to some slightly provocative, is in their refinement largely practically motivated and expresses the connections between rooms in the building.