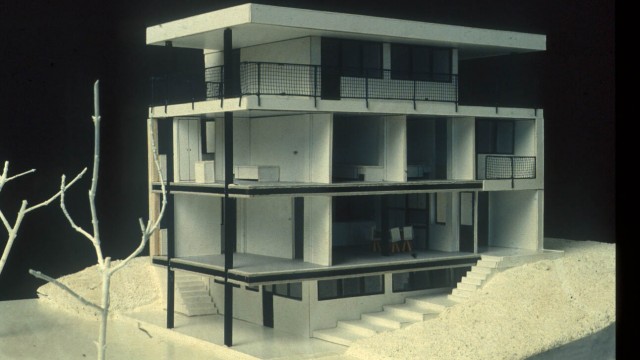 Paul Artaria was a swiss architect, teacher and writer. He was initially apprenticed as a construction draughtsman (1906-8), then spent time in the Gewerbeschule, Basle (1909-10), before working in various offices in Basle and Lausanne. From 1913 to 1920 he worked for Hans Bernoulli, an experience that was crucial to his development, and was involved with the building of low-cost housing and the planning of housing estates. In 1920 he began to work with Karl Zaeslin (1886-1936), for example on the ‘Nur-Dach-Holzhaus’ (1920), Pr?les, and they practised together formally from 1922 to 1924; a notable achievement was their competition-winning house design (1922; unexecuted), Kriens. After a major success in the competition for the Habermatten estate (1923) in Riehen, conceived in an innovative terraced style.

The house for a family of seven embodies the ideals of rationalism in an exemplary manner. The steel skeleton is not only cost argument, but determines the design of radically reorganizing power . Along with the house Colnaghi and the House Schaeffer owns the house Huber of the masterpieces of avant-garde modernism in Switzerland . It was renovated in 1993 and included in the cantonal monument directory.
The house is from the road moved away across the slope and is oriented with its main front to the south towards the garden. As requested the floating horizontal by a credible anchoring of the building in the fixed base enters the core of the house with base, staircase and roof rooms corporeal appearance. The promise of the skeletal structure opens up the functional disposition of any freedom, fulfilled in the interior in a very casual manner.
The raster order shows in the main view across rectangular fields in four axes on four floors, which soon closed as flush with the façade used sliding windows open as soon forecourt, patio, balcony or wrap-around deck . The inhabited areas are all located at a back- continuous transition and occupy the ground floor as a living and dining room two, otherwise each axle. The systematic character of the design decisions also supports the color scheme. The walls in the living room are in a sunny yellow, interior doors in black and gray, the exterior doors in Pompe Janisch Red given.