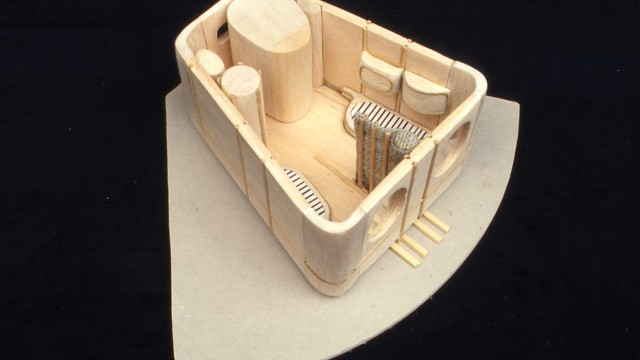 About the group and the Architect :

•Archigram was an avant-garde architectural group formed in the 1960s – based at the Architectural Association, London – that was neofuturistic, anti-heroic and pro-consumerist, drawing inspiration from technology in order to create a new reality that was solely expressed through hypothetical projects. The main members of the group were Peter Cook, Warren Chalk, Ron Herron, Dennis Crompton, Michael Webb and David Greene.

•Warren Chalk (1927–1988) was an English architect. He was a member of Archigram. Amongst the group he was known as “the catalyst of ideas”.

The idea of conceptual project – Capsule Homes – arose from the concept of living in the space capsule, where living space is hard to conquer, everything is centered on more basic needs, and strictly personal space is becoming smaller. This project is essentially a space capsule modified to a form of portable, expendable home. The Capsule Homes is especially significant project between Archigram’s projects, because it follows group’s key principles – mobility, adaptability, and expendability.

Each capsule is designed efficiently with fold-away parts, such as a fold-out screen and a clip-on appliance wall to create additional space. The outside will be free to be whatever color or design one wants it to be, while being displayed to the world around. Component parts of different models are interchangeable and may be replaced when outdated or when needs arise. The units may be organized in a cluster, plugging into one another to create a larger structure that may be arranged horizontally or vertically as in Capsule Homes Tower.