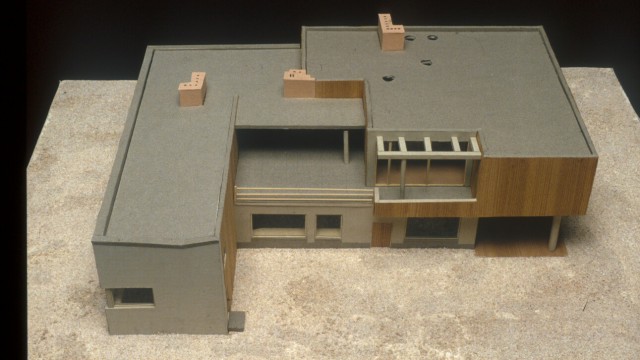 Hugo Alvar Henrik Aalto (3 February 1898 – 11 May 1976) was a Finnish architect and designer, as well as a sculptor and painter. His work includes architecture, furniture, textiles and glassware. His furniture designs were considered Scandinavian Modern. What is typical for his entire career, however, is a concern for design as a Gesamtkunstwerk, a total work of art; whereby he – together with his first wife Aino Aalto – would design not just the building, but give special treatments to the interior surfaces and design furniture, lamps, and furnishings and glassware. (“Alvar Aalto” 2017)

In 1934, Aino and Alvar Aalto acquired a site in almost completely untouched surroundings at Riihitie in Helsinki’s Munkkiniemi. They started designing their own house which was completed in August 1936.

The house was designed as both a family home and an office and these two functions can clearly be seen from the outside. The slender mass of the office wing is in white-painted, lightly rendered brickwork. There are still clear references to Functionalism in the location of the windows. The cladding material of the residential part is slender, dark-stained timber battens. The building has a flat roof and a large south-facing terrace.

Although the streetside elevation of the house is severe and closed-off, it is softened by climbing plants and a slate path leading up to the front door. There are already signs of the ‘new’ Aalto in the Aalto House, of the Romantic Functionalist. The plentiful use of wood as a finishing material and four open hearts built in brick also point to this.

The Aalto House anticipates the two-year younger Villa Mairea, a luxury residence where Aalto’s creativity was able to come into full bloom. But in contrast to its larger sister, the Aalto House is a cosy, intimate building for living and working, designed by two architects for themselves, using simple uncluttered materials.