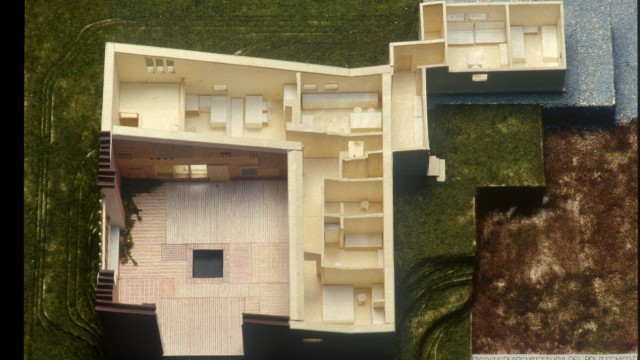 The Muuratsalo Experimental House is situated on the western shore of the island of Muuratsalo. Elissa and Alvar Aalto discovered the site for the house while Säynätsalo Town Hall (Alvar Aalto 1949-52) was under construction.

The summer home, usually known as the Experimental House, consists of the main building and a quest room-wing, completed in 1952 and 1953, respectively. The L-shaped main building and walls enclose an internal courtyard which opens towards the south and west, across Lake Päijänne and the main approach route. In the internal courtyard, the facade treatment of the house changes from white-painted plastered walls to red brick. The heart of the patio is formed by an open fireplace in the center of the courtyard. The walls have been divided into about 50 panels which have been finished with various different kinds of bricks and ceramic tiles. The surface of the internal courtyard has also been finished with different brick patterns, in contrast to the rest of the site, which has been left in its natural state. The quest wing, the woodshed and the rock face form a screen to the informal garden area to the east of the building.

The Experimental House functioned as a summer home for the Aalto family until 1994. The furniture in the house is Artek and designed by Alvar Aalto. Alvar Aalto museum takes care of the building and is organizing guided tours.