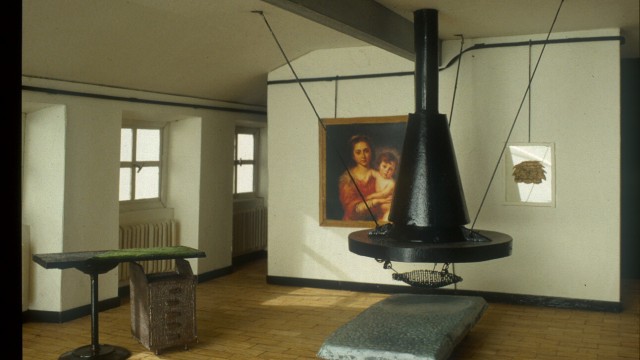 Franco Albini (17 October 1905 – 1 November 1977) was an Italian Neo-Rationalist architect and designer. A native of Robbiate, near Milan, Albini obtained his degree in architecture at Politecnico di Milano University in 1929 and began his professional career working for Gio Ponti. He started displaying his works at Milan Triennale. In 1930 he opened his own practice. Through his creations, the modern furniture design merged the Italian traditional artisanship with the new forms of modernism. In his creations, he used raw, inexpensive materials. He exploited the very skilled Italian craftsmanship. This also meant an elegant design based on a minimalist aesthetic.

In 1951 the Genoa area superintendent of fine arts, Caterina Marcenaro, approached Albini for the interior renovation of Palazzo Bianco, the sixteenth-century palace that houses the city’s Renaissance painting collection. Rejecting the idea of interiors stylized to the pictures’ themes, Marcenaro sought with Albini’s expertise to provide places that might be reduce to essentials, spaces in which the collection’s selected works could shine with distinct and precise identities. Albini devised walls of luminous gray dividing the original stucco ceilings and dark red floors. The paintings are hung without frames on wires or placed on metal supports in the open area to define gently flowing spaces. Luigi Moretti, who had his own gallery, remarked that Albini’s spaces “ring anew in lean rhymes”. Albini helped Marcenaro completely renew the art museum in Italy.