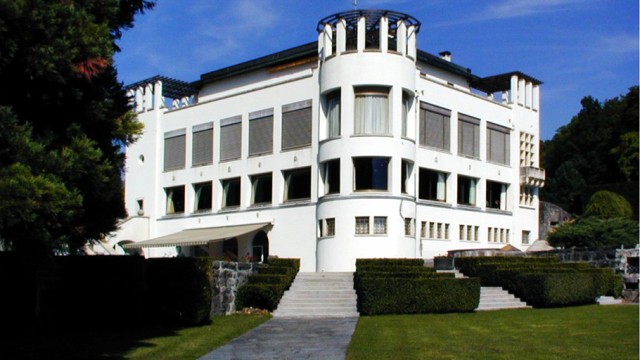 Andalusia existing building (14.5 by 11.5 meters) was added and a floor 3.5 meters wide on three sides. The work was interrupted several times and for a short period of time, the Viennese architect Max Fabiani, took the project.

In late 1906, Loos leaving work at the Karma village due to disagreements with the client. Swiss architect Hugo Ehrlich who was definitely out of the project.
Despite the unfavorable conditions, this house can be considered as one of the most important early works of the architect, Loos had 33 years.

The subtle use of the characteristic properties of various materials and shows its innovative architecture.

This villa is a unique example of their (the lining theory) that the components of a house constuctivos are through architecture.

Apart from the main facade of smooth plaster with four Doric columns, all the wealth of the house is on the inside: use plenty of marble floors and walls to coat, wood for walls and ceilings as well as sheets of copper for the roof dining. Such richness is particularly evident in the bathrooms, a marble-white marble and the other black.
The use of material properties such as size and color, for example, should be considered in relation to the historical cultural context, is not the ornament, but who defines the surface material of architecture.

The contrast of materials is particularly enhanced by the design of individual rooms at the entrance oval surface white, black and red marble oppose golden mosaic ceiling in the library, the marble veining in black and white is combined with panels of mahogany and white ceilings revoked in the dining room wall covered with white marble leads a copper roof.

This aesthetic concept is completed in the following projects with the allocation of rooms at different heights, a concept called Loos RAUMPLAN or plant space.