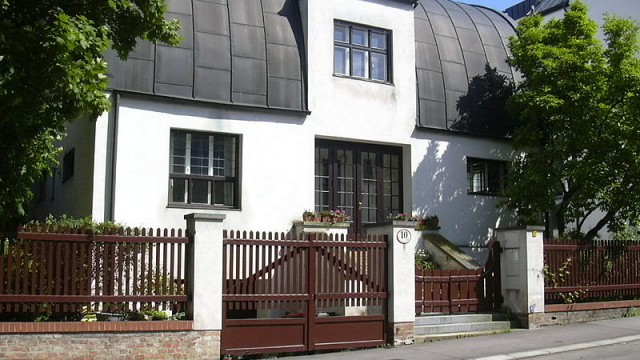 Loos was still starting his career in 1910 when he designed and constructed the Steiner House in Vienna, Austria. This design was much better accepted than Loos’ earlier works and quickly became a worldwide example of rationalist architecture. In his buildings, Loos normally starts with one main volume in which the space, configuration, and elements follows the rules and composition of classical architecture. He organizes the interior of that volume with smaller cubes, rectangles boxes, and cylinders arranged in a volumetric puzzle of sorts. This determines the internal organization of his buildings and Loos regularly uses protrusions from the main block to create other areas of the building such as terraces.

In the Steiner house, Loos uses his volumes to create a classical tripartite façade. He does this by creating a recess between the two wings of the house that continues straight to the roof. In general, Loos lets his fenestration be subdivided into squares and rectangles that all obey a modular system, which correspond perfectly with the geometry of the façade. This system sets up order on the interior such as the living room being connected to a terrace that has access to the garden. Even in this early design, Loos uses interior organization that would remain with him throughout his career. In the Steiner house, the living area is raised slightly above the ground level and separated from more private areas of the house such as bedrooms and painting studio, which was located on the first floor. The served space in this house is neatly separated from the serving space by placing the serving space in the basement and attic. This was the style for which Loos strove: a refined and intricate interior with and simple and nonthreatening exterior.

The Steiner house has a stucco façade like most of his other buildings but not without reason. Loos built his buildings with roughcast walls and used the stucco to form a protective skin over the bricks. Loos did not want to use the stucco as a cheap imitation rock and condemned that practice; in general he used stucco for its functionality. The stucco façades have another benefit: they create a smooth, unornamented, and white surface. This surface represents the nature of the material and also does not hint to what is inside the building.