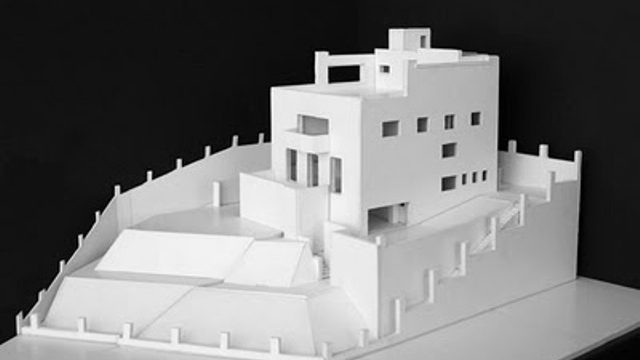 The Rufer House was designed by the Architect Adolf Loos (Adolf Franz Karl Viktor Maria Loos) in 1922 for Joseph and Marie Rufer. It is considered to be the first example of the new style of the “Raumplan”. The Raumplan was very different from its predecessor the freeplan in its internal spatial organization. While not as well known as some of other houses by Adolf Loos, this set the precedent for his later designs.

The house is an almost cubic volume with its dimensions of 10 x 10 x 12 meter. The exterior walls are load bearing leaving the interior walls to partition space. A central column runs through the house hiding the plumbing and also acting as a framing device on the second floor. This central column is a grounding agent, connecting the entire house and acting as a point of reference.

Raumplan sets out to emulate a natural landscape internalized through interconnecting volumes and the Rufer House does this through its multilevel organization on a single floor. While both, the first and second floors of the house, have this split-level distinction, the second floor is the one best seen as Raumplan. The second floor is made up of the living area on the lower level and the dining room on the higher level. The dining area is seen as a part of the living area and thus its volumes intersect. The level change gives the dining room volume a distinction from the living room volume. A small staircase connects the two levels. The central column of the building, while creating the distinction between the two volumes, also frames the space creating a diagonal view through the house between the lower and upper levels of the floor. The private study found on this floor is seen as separate. It is a solid volume that is disconnected from the continuous spaces of the living and dining areas and grounds the floor to the exterior walls. Finally, the terrace that connects to the living room is an outdoor space that was carved out from the interior space and is overhung by the floor above it. This suggests that it is both an outdoor and indoor space and blurs this threshold.